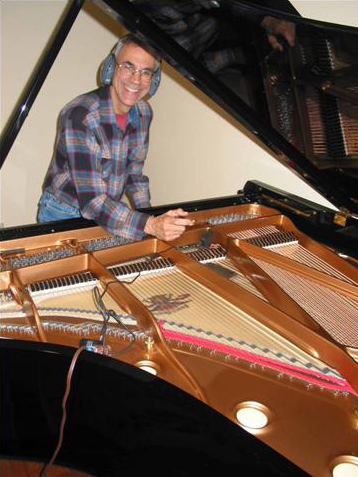 Piano tuning is my specialty. I excel at precision tuning. I have always had a fine ability to perceive small differences in sound. At the age of five I began taking piano lessons. At eight — in third grade — I was tested by a highly skilled musician for my hearing ability in order to select an instrument to play in the elementary school orchestra. I had no idea and was thinking that the trombone looked pretty flashy. However, the tester was amazed at my ability to discriminate small differences in sound, to be able to identify and repeat intervals, and to recall and sing notes upon demand. The music instructor commented that I had such a good ear that I should play the violin, so I said OK. Learning the violin turned out to be a wonderful choice for many reasons, but for starters it made me realize how moving my finger even the slightest bit on the string would change the sound so much.

I went on to become first chair in the first violin section in the elementary school orchestra for fourth, fifth and sixth grades. I went to musical summer camp for five summers, and ended up getting an unpaid job tuning seventy violins during recess every day. I joined the Seattle Youth Symphony, and later played in the Bellevue Philharmonic Orchestra. In high school I played in a string quartet. During college I played in the orchestra, the string quartet, sang in the choir, sang tenor in the select madrigal group, and performed in the operas and musicals. In both high school and college I formed my own barbershop quartet. During the summers I played my violin at summer camp and eventually became the music director there for a couple years where I fiddled for square dances, accompanied campfires, and led all the singing after meals. During all this time I continued to return to playing the piano.

After college I began tuning pianos. I apprenticed under three technicians who are no longer alive — one of whom was blind — and studied assiduously for five years before taking the PTG exam. I passed what was then as rigorous exam as it is now at what was then called the “Master Craftsman” level — currently called “Registered Piano Technician.” Nearly every month since then I have attended every technical presentation, seminar, convention, and workshop that has been offered in our area and some national; now I teach as well as learn.

The bottom line to learning how to tune pianos is to tune a lot of them, and by now I have tuned thousands. There are a three definitions of an “expert” that I like.